Spare the Children: The US/Saudi Arabian War on Yemen

In recent weeks we have seen a huge escalation of the war against Yemen being waged by a coalition of forces that includes the United States, Saudi Arabia, United Arab Emirates, the UK and France.  These forces have waged a relentless war against Yemen, the poorest Arab country.  There has been continuous bombing of the country by Saudi Arabia, including hospitals, schools, food supplies, neighborhoods, infrastructure and other civilian targets.  More than 14,600 civilians have been killed and injured and over three million people have been internally displaced.  The devastation has been so bad that the country is now entirely dependent on outside aid as eight million Yemenis face famine.  The worst cholera epidemic ever has caused over 1 million cases and resulted in more than 2,200 deaths. 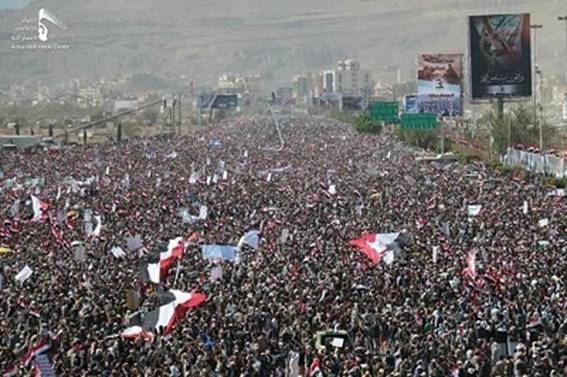 Even before the war began, this impoverished country imported 90% of its food.  The port of Hodeidah has been the primary entry point for food and other aid and is now the target of a new offensive by the US/Saudi/UAE coalition threatening mass starvation to get the Yemeni people to submit to their will.   The recent attack on Hodeidah has included massive Saudi bombing of the port and a ground force that includes officers from the UAE leading anti-Ansar Allah Yemenis along with mercenaries, many from Sudan.  This attempt to close the port of Hodeidah should be seen as a war crime.

This is a genocidal war that could not continue one day without US support.  This support includes:

- US military equipment worth billions of dollars,

- US naval blockade of all Yemeni ports,

- US in-air refueling of Saudi bombers,

- US elite military advisors and commandos,

- US drones carrying out targeted assassinations.

The corporate media claims that there is a civil war in Yemen between “Houthi rebels” and the “legitimate government” of Yemen, but this lie is criminal in light of the suffering of the Yemeni  people.  In 2012 the indigenous Ansar Allah movement, which includes the Houthis, and other contending forces in the country came to an agreement for Abed Rabbo Mansur Hadi to be elected president for a two-year term.  In 2014, after breaking the agreement and losing all support, he fled to Saudi Arabia and the Ansar Allah movement came to power as hundreds of thousands marched in the streets in their support.


The Saudis claim the Houthis are proxies of Iran, their major enemy and competitor in the region. In 2015, Saudi Arabia started its bombing of Yemen to try and reinstate Hadi into power and crush a popular movement.  Their invasion was supported by some other Arab countries and the US.  It was the Obama administration that first gave the green light to Saudi Arabia, and the Trump administration has continued the policy.  Without US military and diplomatic backing, the war on Yemen could not take place.  It rightfully should be called the US/Saudi Arabian war on Yemen.


Many in the US have been horrified by the arrests and separation of families at the US border.  This has laid bare the inhumanity of the US government and has caused deserved outrage from the people of the US and the world.  As on the US border, children are the major victims of imperialist wars and induced-poverty.  The outrage and revulsion caused by the children’s plight in the US forced some backtracking by the US government.  The humanitarian crisis in Yemen demands the same outpouring of compassion, anger, and action by the US media and people and the international community for the suffering children and civilians in Yemen as well.  We can and must stop this horror.

End to US support for the war on Yemen and end to the fighting!

End the blockade and provide humanitarian aid to Yemen!