UNAC Statement on the Bolivian Coup

The United National Antiwar Coalition (UNAC) condemns the U.S. sponsored military coup in Bolivia and urges protests throughout the country. The U.S. uses the corporate media, the bipartisan imperialist consensus, and pressures members of the Organization of American State (OAS) to support its regime change efforts against nations in this hemisphere who oppose Washington’s neo-liberal agenda. 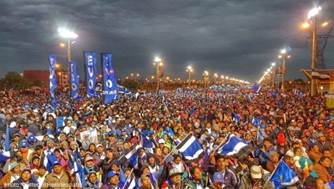 President Evo Morales was the first indigenous president of Bolivia. When he was granted asylum by the Mexican government, he said these words upon his arrival. "If I have committed a crime; it's being indigenous. If the Vice President has committed a crime; it's implementing social programs for the humble and poorest sectors seeking social justice."

The coup is not just an attack on President Morales and his party Movimiento al Socialismo (MAS) but on all the Indigenous, working people, and the poor of Bolivia and all of Latin America.  It makes clear that if any country believes it can oppose the dictates of Washington and Wall Street they will be hit with economic sanctions, coups or regime change wars.

As we write this statement, we hear word of a resistance to the coup.  In the largely indigenous city of El Alto, a city of 1 million people neighboring La Paz, meetings have been held throughout the city calling for “war on the coup.”   They have called for defense committees to be established and for a new Trade Union and Civilian Police Force to be established to safeguard the people and their institutions.

UNAC supports the right of self-determination of the Bolivian people and demands an end to all U.S. intervention.  UNAC member groups and others have been organizing solidarity demonstrations around the country. We urge all to support these actions or build one in your area.

Down with the Coup!