Report on UNAC's trip to Russia 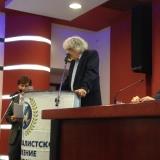 conference in Moscow this month.  We were invited by the Anti-Globalization Movement of Russia.  The five UNAC members who attended the conference were Margaret Kimberley of Black Agenda Report and the UNAC Administrative Committee; Joe Iosbaker of the Committee to Stop FBI Repression, the Rasmea Odeh defense campaign and the UNAC Administrative Committee; Bill Dores of the International Action Center: women's rights activist, Mo Hannah; and UNAC Co-Coordinator, Joe Lombardo.  We spoke at the conference on December 13th, held a press conference in Moscow and had many interviews with the Russian media.

Along with the presentations by the UNAC members, we also heard presentations by a number of leaders from Novorossia (the area declared independent by the people of Eastern Ukraine), including Oleg Tsarev, the speaker of the Parliament of Novorossia and Alexander Kofman, the Minister of Foreign Affairs of the Donetsk People’s Republic.  Leading Russian journalists spoke, as did representatives of the Italian European Communitarian movement; a representative from Srpska, the Serbian section of Bosnia; and others. 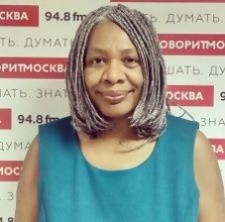 The UNAC speakers gave strong antiwar talks (see below for links to the various talks).  Additionally, Margaret Kimberley spoke on the police murders of Michael Brown and Eric Garner, the ensuing protests and the connections of police brutality of Black Americans with the wars abroad and at home.  The reporters were very interested in these issues and she did a number of media interviews.  Joe Iosbaker talked about the case of Rasmea Odeh, the Palestinian women organizer who is being threatened with deportation and prison.  He also spoke about his own case where he and other antiwar activists had their homes raided by the FBI and may face a federal grand jury.

During dinner one evening, we also spoke at length with one of the fighters for the defense forces in Donetsk.  He lived in Kiev during the

Euromaidan protests and initially joined the protests on the pro-Maidan side.  It became clear to him that neo-Nazis were playing a leadership role and were fomenting anti-Russian sentiment.  He eventually left Kiev and joined the defense forces in the East.  He explained that they have been holding back the Kiev forces.  He also said that in July, they had hopes that Russia would join their fight, but by August it was clear that such a move would cause a direct conflict with the U.S. and NATO and possibly a world war, which Russia could not risk.

We also met with the Palestinian Ambassador to Russia at the Palestinian Embassy. Later, we attended a demonstration at the US Embassy organized by our Russian hosts.  At the demonstration, we chanted, "Hands up, don't shoot," and carried signs with the logos of UNAC and the Anti-Globalization Movement of Russia in support of Eric Garner and Michael Brown. We laid flowers in front of the Embassy in honor of the murdered men.


Over the period of the week we stayed in Moscow, the US and NATO held military exercises in Estonia, right on the Russia border. We watched the ruble go up and down, but mostly down due to sanctions and the falling oil prices.  These are clearly attacks on Russia from the US and Western powers.

While in Moscow, we also watched the TV coverage of Russian president Putin giving his annual press conference. It was very interesting and different from an Obama press conference. First of all, it lasted for three hours.  The entire press conference was televised.  After a short talk, Putin answered all questions, even those unfriendly toward him.  He even took questions from reporters from Kiev who hold right-wing positions and from a hostile BBC reporter.  In the US, if such questions were asked, the reporters would never be allowed back to a press conference and their media outlet would be banned from future White House press conferences.

During the press conference, Putin gave figures to show that their economy has been growing in the past year. He then addressed the question of the falling ruble. He explained that they will be able to weather the crisis but it has pushed them into a position where they need to create more diversity in their economy.  This, he projects to happen within a two-year time period.

Through our participation, we were also able to make an important contact with a leader of the antiwar movement from Kiev.  They are opposing the Kiev government’s war on the people of Eastern Ukraine, advocating for prisoners of war, and working to get material aid to the people in Eastern Ukraine who are suffering from Kiev’s military aggression against them.

Moscow is a modern city much like any large U.S. city.  The people were dressed well, and looked healthy and cared for.  We learned that many of the social benefits that existed under the Soviet Union still exist.  These include free universal healthcare.  For most people, college was free, and students received a stipend for their living expenses.  Putin is very popular with a high approval rating among the Russian people.  The people see him as a kind of populist leader.

The Anti-Globalization Movement of Russia is a young movement.  Its central leader, Alexander Ionov, is only 25 years old.  They consider the world as “unipolar,” meaning that it is dominated by the U.S. and its allies.  They call for a counter-position to this, a “multipolar world, in which the right of sovereignty for all nations is respected.”  They also call for the right of all people to self-determination.

The leaders of the Anti-Globalization Movement of Russia have expressed an interest in attending UNAC’s conference in May.

Below are links to the written talks by each of the UNAC members who attended the conference in Moscow.

[Marina Nova, who is part of the Antiwar Committee in Chicago, which is a UNAC affiliated group, also attended on her own and spoke at the conference.  She is Russian from TransDniester, which is part of Moldavia.  She spoke on the situation of the Russian minority in Moldavia but we do not have her talk in writing.]


The web sites for the Anti-Globalization Movement of Russia are here: http://anti-global.ru and http://stop-imperialism.com