Ban all Nuclear Weapons Beginning with the United States

On August 6, 1945 and again on August 9, 1945 the United States dropped atomic bombs on the cities of Hiroshima and Nagasaki, Japan. The stated reason for this first and still only use of atomic weapons was the need to hasten the end of World War II.

But Japan was devastated by months of the bombing of its cities, and numerous defeats at the hands of the United States military. Japan finally surrendered unconditionally when the Soviet Union declared war on the empire of Japan and briefly invaded Japanese held Manchuria. The instant incineration of 250,000 people and follow this by additional tens of thousands more who died subsequently from associated wounds, radiation poisoning and radiation-induced cancers years later was primarily a warning against the Soviet Union whose war time marriage of convenience with the United States was about to end. 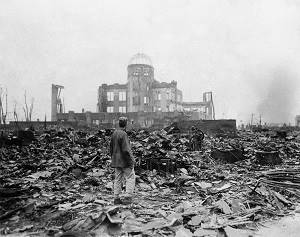 Hiroshima after US atomic bombing

Now seventy-five years later the threat of nuclear war is again upon the world and the United States is still the perpetrator. The Trump administration has withdrawn from nuclear treaties ratified with the Soviet Union and the Russian Federation decades ago. The Open Skies Treaty and the Intermediate Range Nuclear Forces Treaty have in effect been torn up by the Trump administration’s unilateral withdrawals. The New Strategic Arms Reduction Treaty is next on the chopping block.

Seventy-five years later it is imperative to continue the work of nuclear non-proliferation. The Bulletin of the Atomic Scientists has set the Doomsday Clock at just 100 seconds before midnight. Yet the issue of nuclear annihilation is rarely mentioned by the corporate media and has disappeared from the electoral agenda.

Not only must Hiroshima and Nagasaki be commemorated but the issue of nuclear weapons must be front and center in all anti-imperialist work. The struggle must include a determination to speak against nuclear weapons being used as a pretext to confront nations targeted by the U.S. and NATO. Nations such as the DPRK, North Korea, should be approached as a sovereign states with their own interests. A final end of the Korean War, never officially ended nearly 70 years after the cessation of hostilities, would help to bring about meaningful negotiations. While the U.S. demonizes the DPRK, its ally Israel has an unknown number of nuclear warheads but is never mentioned as a country which must end its nuclear capabilities. The nuclear danger will only end when the U.S. and NATO end their threats against the rest of the world. The nuclear threat will end when all imperial aggressions end as well.

Ban all nuclear weapons beginning with the United States!