Demonstrations took place around the world in solidarity with our anti-NATO and G8 actions in .  Below is information about some of these actions.

Click here for a joint statement between UNAC and the British Stop the War Coalition: http://nepajac.org/swc.htm.

A solidarity statement was sent to the rally from SYRIZA a left coalition that has gained huge support during the recent fight against austerity measures being imposed on working people in .  The statement can be found here: http://links.org.au/node/2873.

Tens of thousands marched in in solidarity with our demonstration in .  See picture below:

Demonstrations and rallies protesting against the NATO Summit in on May 20-21 and the concurrent G-8 summit were held in different cities of on May 19 voicing solidarity of the people of with the anti-imperialist fighters all over the world who are protesting on these issues in different countries.  Below is a picture of the demonstration in one Indian city. 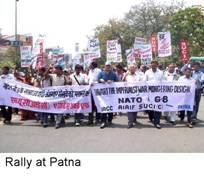 Italians demonstrated and held a sit-in.