US BOMBS SYRIAN ARMY ESCALATING POTENTIAL FOR WAR WITH SYRIA/RUSSIA 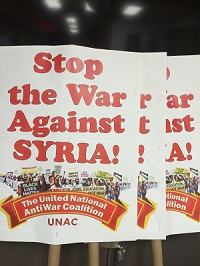 The US-Russian negotiated cessation of hostilities has collapsed in Syria.  The United States has intervened directly in ways that undermine any possibility of the ceasefire succeeding.   On September 18, US forces, four Jets followed by a couple of helicopters, attacked a Syrian Arab Army (SAA) outpost near Deir Ezzor killing at least 82 soldiers and wounding 100 more and destroying their equipment This was supposed to be a joint operation to go after ISIS, but under cover of this attack ISIS fighters stormed the SAA position and took the hilltops where they were stationed.

Just after this unprecedented attack on the Syrian Army by the United States, Israel launched an attack on SAA positions in the Golan where they were fighting Al Nusra, killing and injuring several more Syrian soldiers.

The United States claimed that the attack was an accident.  Even so, US allies, Australia, Denmark and the UK- have confirmed that they too took part. All are assisting in imperialist murder

The Russians called a meeting of the UN Security Council to discuss the US violation of both the current cessation of hostilities agreement' and the Geneva agreement on Syria.   US Ambassador Samantha Power chose to boycott the meeting and instead held a press conference outside the door, which she opened by accusing the Russians of attacking civilians, schools and hospitals in Syria, before sarcastically accusing them of hypocrisy and calling the meeting a “stunt”.  She dismissed the murder of nearly 100 Syrians without a pause.  Powers indignation was clearly intended for her US audience as few others in the world would find her sarcasm and her rejection of the international forum for dialogue acceptable.

One day later, on September 19th, a UN Aid Convoy was struck while passing through opposition held territories in Aleppo, and 18 workers were killed.  A video of the wreckage was posted on the internet by the White Helmets, a US supported NGO that operates only in ISIS and Al Qaeda territories. The United States immediately blamed the Syrian air force, then the Russian air force, and finally “the Russians,” who, after a few hours of public silence, released drone footage showing a truck armed with mortars riding in the shadow of the convoy as it entered hostile territory.  They said that neither they nor the Syrians were in the vicinity of the convoy and that a full investigation would be necessary.

The US has moved from supporting proxies to direct intervention in Syria.  It is the second time in as many months that they have killed nearly 100 Syrians in an air raid.    They have betrayed a long negotiated treaty and when confronted, US Ambassador Samantha Power dissembled and attacked the messenger.  It is clear that the United States remains committed to overthrowing the internationally recognized government of Syria.   Pentagon planners have shown no respect whatsoever for international law or for the United States diplomatic commitments in Syria. They hope to prevent any resolution before a new president is inaugurated.

A few days before massacring the Syrian soldiers outside Deir Ezzor, the United States attempted to insert 300 Special Forces troops with Turkish backed Free Syrian Army factions in the town of Ra'i near the Turkish border.   The Americans were driven out by an angry mob of men calling out their hatred of Americans in between cries of 'Allahu Akbar'.   Later in the day, US bombers 'accidentally' struck a nearby town where the hostile organizations were billeted.   Shortly thereafter, US special forces returned to the town of Ra'i to join the remaining Free Syrian Army groups there.

The United States has been holding up the cessation of hostilities from reaching a full implementation and clearly has no intention of honoring it.   The Syrian military has stood down in the vicinity of Aleppo, yet the US has made only a halfhearted effort to separate their so called 'moderates' from the mercenaries and fanatics of Al Nusra/Al Qaeda.

The negotiation was a sham and now the US continues to dissemble, buying time to reinforce their proxies and put more US soldiers on the ground.  The Pentagon is sowing the seeds of open warfare against the legitimate government of Syria (and the threat of war with Russia) while exacerbating the horrific humanitarian crisis of the Syrian people.

The time to stop them is NOW!

US Out of the Middle East!