UNAC Statement on the Current Uprising

NO Police State! NO Military Dictatorship!

Release all arrestees! NO more attacks on anti-racist protesters! 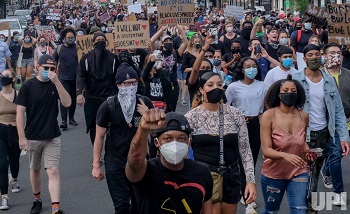 The United National Antiwar Coalition (UNAC) stands in solidarity with communities across the country who are rising up in protest against racist police violence. As Donald Trump calls for the deployment of the U.S military in response to these national protests, UNAC condemns the use of any police and military forces being deployed to violently suppress these protests. We call on all anti-war activists to help organize or join in these actions demanding justice and an end to the state-terror being inflicted upon black and brown communities within this country.

The ongoing protests began in Minnesota on Monday May 25, 2020 in response to the murder of George Floyd, a 46-year old black man, by four police officers in the city of Minneapolis. The horrific killing was caught on multiple videos which revealed two cops pinning an already handcuffed Floyd facedown to the ground, one cop standing over him, and a fourth one pressing his knee into the victim’s neck for nearly nine minutes even as he cried, “I can’t breathe,” and soon became unresponsive. Floyd died moments later.

On May 29, only after FIVE DAYS straight of militant protests in Minneapolis and in major cities across the country, the cop caught kneeling on Floyd’s neck was finally arrested and charged with third degree murder. His three accomplices have yet to be charged.

Of course, this tragic killing did not happen in a vacuum. It represents a trend that has gone on for too long in this country. There are over 1,000 victims of lethal force every year in the U.S. And unarmed black men and women and children have been terrorized and killed by police for over a century with hardly any of the cops involved ever facing charges for their crimes. Within the last years alone, only those cases caught on camera or other recording devices have caught the eyes and ears of those in power; and even then, justice is rarely served.

Most recently, cases such as that of Breonna Taylor and Ahmaud Arbery have gained national attention weeks after they were killed by police and former police officers and only after videos and 9-1-1 recordings were leaked to the media. The police who murdered Taylor in her own apartment have not been charged, and Arbery’s killers who shot him while he was out jogging were not indicted until video of the incident caused public outcry and protests weeks later.

This current nation-wide uprising has been characterized by a week of major protests and acts of civil disobedience in nearly every state throughout the country. Hundreds of actions have taken place in cities big and small, from coast to coast, to denounce not only the murder of George Floyd, but the long history of oppression and state-violence against black Americans that never ended and that has never even been truly acknowledged by the United States.

Just as the antiwar movement has challenged the ongoing U.S. racist and imperialist wars abroad, the massive protests across the country today are challenging the institutionalized racist violence at home. The millions in the streets today are a harbinger of the broad and united mobilizations to come that have the potential of posing a fundamental challenge to the oppressive, racist, violent system itself.